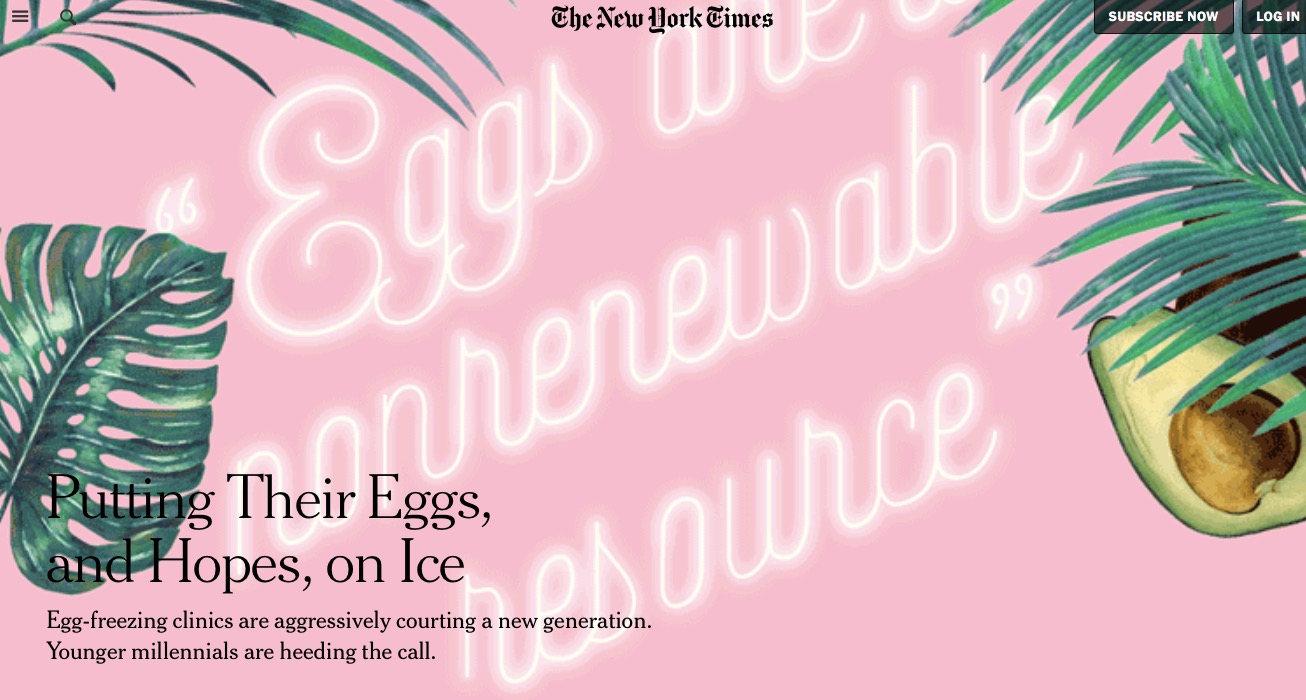 Jennifer Lannon lay, her feet propped in stirrups, on an examining table at Extend Fertility, an egg-freezing clinic in Midtown Manhattan. A screen at her right displayed the results of her ultrasound, the image closely monitored by Ms. Lannon and her doctor, Joshua Klein.

How many eggs could she expect to see? she asked. She would likely end up with some 20, Dr. Klein told her. He was making no promises.

“But to the extent you can ensure fertility later,” he said, “you are in very good shape.”

She ought to be.

Ms. Lannon, who works for Dot.Health, a website that stores participants’ medical data, is 26, more than a decade younger than most women freezing their eggs in the hope of maximizing their chances, when they are ready, of conceiving and bearing a healthy child. She has no known reproductive issues or urgent health concerns. But in her mind the clock is ticking.

“Fertility declines at 22,” she repeated like an incantation in a post-exam interview, information she had picked up at a medical conference she attended as part of her research for Freeze.Health, an informational site she introduced this year with her business partner, Sidonia Rose Swarm.

A self-defined take-charge personality, Ms. Lannon would be taking no chances. Her objective, she said, was “to know that later in life I’m going to have the best shot at having viable frozen eggs for when I need them.”

She is also, she knows, a target for the many egg-freezing clinics springing up across the country, facilities that tout the procedure as a breezy, accessible and eminently sensible lifestyle choice for the youngest members of the millennial generation.

Fertility preservation, as egg freezing is known, “used to resonate primarily with women in their late 30s,” said Susan Herzberg, the president of Prelude Fertility, a nationwide network of fertility clinics. These days the market is skewing younger, the result in part of a promotional shift.

“We are now targeting women in their 20s and early 30s,” Ms. Herzberg said. Her company, like many others, is intent on spreading the gospel that for the youngest consumers, as she said, “the process has never been better, faster or cheaper, or more likely to yield a better store of high-quality eggs.”

It’s a message the company plans to magnify via a national advertising campaign encompassing radio, television, print and social media. A half-dozen years ago, around the time freezing technology had advanced to the point that the American Society for Reproductive Medicine (ASRM) no longer deemed the procedure experimental, clinics like Prelude, Pacific NW Fertility in Seattle, Shady Grove in Washington and Ova in Chicago began reminding their youngest target customers that fertility is finite and begins to wane as early as one’s 20s. Those clinics once catered almost exclusively to women at the older end of their childbearing years.

Their messaging, generally friendly and fact based but in some cases alarmist in tone, varies from Ova’s invitations to “freeze for your future,” to Extend’s more urgent “eggs are a nonrenewable resource.” The exhortations are underscored by cheery images variously showing gaggles of young women gathered over drinks or ambling arm in arm down a city street.

To provide intelligence to consumers, and presumably whip up business, some clinics are hosts to “lets chill” egg-freezing parties, inviting guests to take in facts and figures along with Champagne and canapés.

Others glamorize the procedure in Instagram posts that feature women like Kaitlyn Bristowe, a lead on “The Bachelorette,” who have tweeted independently about their own freezing experiences. Kindbody, a clinic in New York, takes an even more aggressive approach, inviting potential clients to hop aboard a pop-up van to have their hormone levels tested.

Clinics have further eased barriers with significant price drops. Once as high as $19,000 for the cost of a single cycle, fees today can vary from about $4,000 to $7,000 for a procedure that entails one to two weeks of birth control pills to turn off natural hormones, nine or 10 days of hormone injections to stimulate egg production, followed, once the eggs have matured, by retrieval and freezing. (Initial consultation and storage are not generally included.)

Moreover, some boutique-like freezing facilities offer financing incentives to clients still advancing in their careers or paying off college debt.

No surprise, then, that millennials are heeding the call, intent on securing their reproductive futures. They form part of the population of some 76,000 women expected to freeze their eggs in the United States this year, according to the Society for Assisted Reproductive Technology.

Three years ago, Valerie Landis, who froze her eggs in her early 30s, began documenting her experience on Eggsperience, a blog that she has since expanded to provide a road map for women contemplating the procedure, along with Eggology Club, a weekly podcast to keep followers abreast of the latest developments and technologies. When she started her project, her respondents were mostly over 37.

“Now I’m hearing from parents who have teenagers and college-age daughters who are looking at this as a future gift,” Ms. Landis said. “I have 25-year-olds call me because their parents are willing to foot the bill.”

For better or worse, enthusiasm for the procedure reflects a sense of social entitlement that some say is coupled, as often as not, with a scanty grasp of facts.

“We live in an aspirational age,” said Tanya Selvaratnam, who in her 2014 book, “The Big Lie: Motherhood, Feminism, and the Reality of the Biological Clock,” maintained that college-age women are only sketchily informed about their own reproductive cycles, an argument since borne out by several surveys.

Biology is often at odds with feminist ideals, Ms. Selvaratnam argued in an interview, and science, while promising, has yet to produce miracles.

Inflated expectations are “part of a collective phenomenon,” she said, referring to a widely held conviction that when it comes to assisted reproduction, the options are virtually limitless. That notion is particularly appealing to single women with no imminent prospect of finding a partner with whom to start a family.

According to a Yale University study published in July, career ambition is not the major factor that impels many women to delay childbearing. “A lack of a stable partner is the primary motivation,” wrote Marcia Inhorn, a medical anthropologist who led the study. “Freezing eggs holds out hope for many.”

Motivations remain as varied as the profiles of women who freeze. Some, like Ms. Swarm of Freeze.Health, who has heard her share of distress stories from older women with problems conceiving, views the procedure as a matter of course. “I wear sunscreen to protect myself from future sun damage,” she said lightly. “I work out to keep off my weight. Why would I not do something to prevent future emotional pain and suffering?”

For others, freezing and storing one’s eggs can enhance a sense of material worth. “These young women they are putting their eggs on ice as part of a list of things they are accomplishing,” Ms. Landis said. “It’s like getting a master’s degree or buying a house, all in the name of making themselves more valuable.”

That prospect is alluring to ambitious, focused and hyper-organized millennials. Few are as fiercely proactive as Taylor Lorenz, who writes about culture and technology. Ms. Lorenz, 31, signed on for the procedure at 28, after she broke off an engagement of several years. Not secure with a single freezing cycle, she underwent five more, her final round last summer, when she had harvested 41 eggs.

Ms. Lorenz has no regrets. The process, she said, “is a way for you to feel like you’re in control of your life, at least at the time you are doing it.”

Victoria Reitano, a 27-year-old former television producer turned branding entrepreneur, is more steely in her conviction. “This is not just some whim, like I’m 17 years old and I want kids someday,” she said. “My life plan at some point is to have at least two children. I’ve already made provisions for that.”

That mind-set, however, can be illusory. Undertaking the procedure in one’s 20s can give a false sense of security, a certainty that, responsibly or otherwise, marketers tend to encourage. “You are dealing with women’s existential desire to start a family,” Ms. Selvaratnam said. “You are playing to their vulnerabilities.”

Freezing, as some argue, may even be counterproductive. “Assuming you have normal fertility and nothing unusual in your family history, there’s definitely a point where it’s too early, and we don’t know what the shelf life of these eggs are,” Dr. Janis Fox recently told The New York Times. Dr. Fox is an assistant professor of reproductive endocrinology and infertility at Harvard University and an obstetrician-gynecologist at Brigham and Women’s Hospital in Boston.

How successful is the process? Among younger women, facts and figures are elusive. At the two-year-old Extend clinic, Dr. Klein, the company’s chief medical officer, could offer no figures because, as he explained, no clients have yet thawed their eggs.

He advises patients that the procedure can take a toll, both physical and emotional. Bloating and mood swings are among the most common side effects, as his patients attest.

“In the first few days after I started my injections, I felt incredible,” Ms. Reitano said. “But close to a week later, I started getting ‘mommy brain.’ I couldn’t remember my words. I was very tired. I would take a nap, and then I would just not want to do anything.”

Toward the end, she said, “I didn’t even want to see another human being.”

Ms. Page, who underwent the process at Extend shortly before her 30th birthday in February, had been similarly advised that she might experience emotional swings. In the weeks after starting medication, her spirits plummeted.

“People asked, ‘Oh, is it like PMS?’” she said, then added emphatically: “It’s nothing like PMS. I never understood what depression was like, about not being able to pull myself out a dark mood. It was very scary at the time, but it helped to know that it was going to end eventually.”

Success rates can be less than impressive. According to the ASRM, there is a 2 to 12 percent chance that a single frozen egg will result in a birth. And eggs may be lost. Refrigeration failures reported last spring resulted in the destruction of thousands of eggs at University Hospitals clinic in Cleveland and at Pacific Fertility Center in San Francisco, in which Prelude Fertility owns a majority stake. Lawsuits have been filed in both instances.

For Ms. Page, however, potential benefits far outweigh the risks. She retrieved only five viable eggs from her first cycle but hopes to boost that number with a second round this winter, and eventually a third, at a cost of $8,000 (not including medications and storage) for three cycles, or 15 eggs, “whichever comes first,” she said. She is uncertain that she will ever use them but views the eggs as a safeguard.

“You take care of your body as you would your home,” she said. “You hope your house doesn’t flood, but you get the insurance just in case it does.”

Copyright © 2015-2022 · Eggsperience · All Rights Reserved · Information not intended or implied to be a substitute for professional medical advice, diagnosis, or treatment.
Loading Comments...